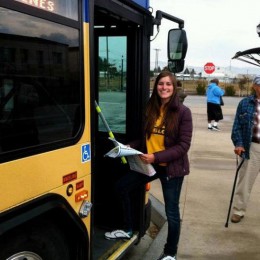 For CAUSE organizer Hazel Putney, the job of an organizer is first and foremost to build leaders. “When I think about community organizing, anyone can list issues such as affordable housing or saving a bus route,” Hazel says, “Getting the bus back isn’t the only measurable goal. It’s also how many leaders you build in the process.”

“Getting the bus back isn’t the only measurable goal. It’s also how many leaders you build in the process.”

Hazel says that effective organizers help residents recognize the power they have and they identify leadership roles for people to step into. An organizer talks to as many people as possible and tries to get them involved in issues that matter to them. Hazel says an organizer can help residents navigate overly-complicated systems at City Hall, so they can mobilize effectively.

“My role is to help them recognize how capable they are,” she says. At a recent public hearing in Santa Maria, Hazel says there was no need for her to take the podium because there were more than enough confident leaders to speak for themselves.

During her time as an organizer, Hazel has helped mobilize bus riders, rallied support for a Tenants Displacement ordinance, and organized a march to protest police abuses. She first became involved in the community through participation in Future Leaders of America and Just Communities.