Sara Miller McCune and George D. McCune* founded the McCune Foundation in March 1990 with the hope of impacting the communities around the world where SAGE Publications had its offices at the time. In the early years, the family foundation supported a range of philanthropic projects in the United States, the United Kingdom, and India. Grants were made to provide books for university students in India and London, and funding was provided to establish medical clinics and dig wells in rural India.

In 2001, the Foundation’s Board of Directors shifted its focus to concentrate on initiatives by community-based groups in Santa Barbara and Ventura Counties that build social capital and give voice to new participants in the democratic process. This significant re-orientation was influenced by early Board Member and political science professor Marilyn Gittell. Fellow Board Member and professor, Sandra Ball-Rokeach, was also a strong advocate and provided additional insights.

By 2002, the Foundation was no longer directing funds toward charity and services, but was instead funding projects that developed community capacity to solve problems. Immigrants, youth, farm workers, and other residents were given support to mobilize in pursuing policies that addressed their particular needs. It was the role of the Foundation’s first Executive Director, Pam Maines, to seek out groups that matched the new focus. “We were able to find groups organizing around issues such as fair wages, farm worker housing, immigrant rights, discrimination, empowering youth, and homelessness,” she says. “With each successive grant cycle, our network of contacts expanded and our mission became better understood.”

Many examples abound of how both youth and adults have developed their social capital and taken their place at the decision making table in Santa Barbara and Ventura Counties. 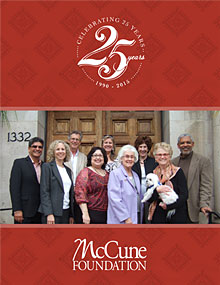